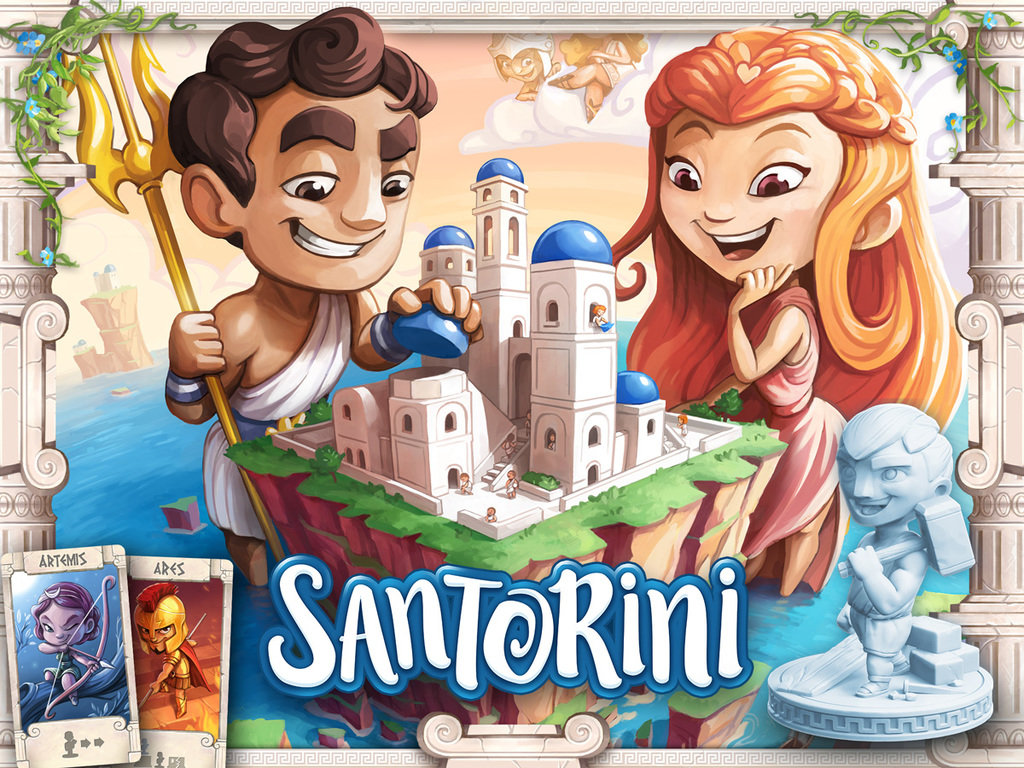 Components cost money.  Adding anything else to the retail edition of Santorini will result in us having to set a higher retail price.  This is bad, because it is important that we keep the retail price of this game accessible to families.

But we still want to give you more free stuff, so we will...  with "Kickstarter Inclusives" (a term we just made up)

Kickstarter Inclusive: A stretchgoal or reward which is given to all backers at no additional cost, but sold separately from the base retail edition after the campaign ends.

Your Kickstarter Copy Includes Everything

That's right.  Every copy we ship to backers through this campaign will include ALL stretchgoals. If you are a backer, you don't even need to read any further.

Due to all the recent discussion in the rules documents, Gord has made it clear that we've got quite a few extra solid gods that he feels can be included with the game.   If you have an idea for a god or hero ability, email it to gord@mathpickle.com with the subject: "Santorini God Idea - [God Name]".   Your god may even make it into the game!

Charon - Transfers souls over the river Styx - Instead of your normal move, choose a neighboring opponent. Jump that piece directly over you to an empty space.

Tabletopia - The Tabletopia folks are hard at work on the implementation of Santorini. This will include full 3D components!   The game will be free to play during the Tabletopia Beta, and when Tabletopia finally goes live, backers will receive a special code to ensure you retain permanent access to the game!

Australia Friendly Shipping - We have sourced several potential fulfillment partners to provide Australia friendly shipping. The estimated cost to ship to Australia will remain the same, but we will pay any duty / import tax on your behalf. This may or may not apply to you depending on the size of your pledge. Performing shipping from within Australia will also reduce the probability for damage / delays.

NZ Reduced Shipping - We are also offering a new pledge level for our Kiwi friends to join with reduced shipping rate (Only slightly higher than Aussies). This reduced rate will only be available to quantities of 1 copy. We are also trying to set it up such that we prepay for all duty / tax prior to your packages arriving in NZ, but this has not been 100% confirmed yet.

Other Parts of the World - We wish there was more time to look at other partners to reduce shipping to other parts of the world, such as Asia, but as we are a very small team, doing so will have to wait until our next campaign. With the increased interest in Roxley's product line, we hope to have a team member dedicated to setting up fulfillment partnerships all over the world. We will look at the countries where we are seeing the most interest, and hopefully we can find a reliable firm to help us in your country, during our next Kickstarter Project.

We will announce release date and time as well as the upgrade of the final batch of Zeus copies in our next update!

Hey there folks, we hope you are having a super awesome weekend!

Here's a photo of the game at Roxley's booth at the GAMA show in Las Vegas.

Selene - Goddess of the Moon: You may build a dome at any level with your female builder regardless of whether or not she moved.

Eros - God of Lust: Your builders start the game in opposite corners. You also win if your Builders are neighboring each other and on the first level. (or the same level in 3 player)

Limos - Goddess of Famine: Opponent’s builders neighboring yours may not build anything except domes on top of the third level.

Some of you may have seen this already, but we thought we'd show off a photo of the prototype.  Please keep in mind that this is a hand made (and 3d printed) prototype, and any / all of these components may change prior to manufacturing, particularly in terms of color, size, surface texture, etc.

Remember to direct message the creator if you'd like to submit a photo of your Home Brew!

Zeus We will be releasing one more batch of Zeus copies toward the end of the campaign. We will also be unlocking a Zeus Upgrade with the final batch.

Furthermore, we will also be creating a stretch goal that simultaneously unlocks something for the Retail, White Box and AND Zeus edition, along with with a little buff to the Zeus Editions.  Zeus is appeased.

Short update today folks!  You crazy people have been knocking down stretch goals faster than we can invent them. We are currently waiting on a few emails and quotes to come back on ideas we have, so we thank you for your patience.

Atalanta - Fleet of Foot - Move Phase: Once per game you may perform any number of additional Move Phases with the same builder.

Nemesis - Goddess of divine retribution against braggarts - Start of turn: Instead of your normal turn, if none of your opponents’ builders are neighboring your builders, you may swap the positioning of your builders with two of theirs.

If you have a few minutes, check out Santorini on The Secret Mediterranean with Trevor McDonald.  Beautiful place!